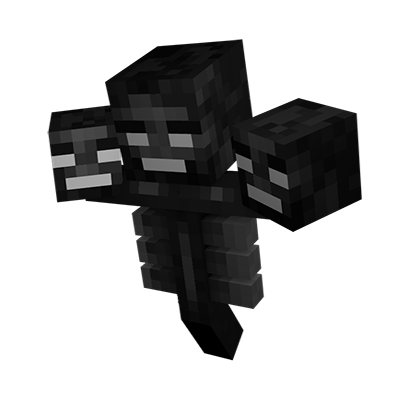 The wither is a three-headed boss mob, who can be created by placing soul sand in a T shapeand putting 3 wither skeleton skulls on top of the three upper blocks. The last block placed must be one of the three wither skeleton skulls. The skull that triggers spawning can be placed by the player or by a dispenser. Air blocks are required on either side of the base soul sand block under the upper blocks.

The wither drops 1 nether star upon death. The Looting enchantment does not work on the wither. It drops 50 experience when killed by a player or tamed wolf.

The wither shoots wither skulls, which look like extra heads of itself launched as projectiles, and can keep up a fairly constant barrage of them. Wither skulls explode with the same force as a ghast fireball. If a wither skull hits a mob/player on Normal or Hard difficulty, it inflicts the Wither II effect, draining their health and turning their hearts black, while healing the wither for 5 (Heart.svgHeart.svgHalf Heart.svg) health. There are two types of wither skulls: a fast moving black one, and a slow moving blue one. The black wither skull cannot break blocks with a blast resistance above 20. The blue wither skull is shot primarily on normal or hard difficulty, when the wither is idle (meaning that no players/mobs are within its aggro range). On average, 0.1% of the shots by the main head (when the wither has a target) are blue skulls as well. Although the blue wither skull has the same explosion strength as the black skull, it treats all blocks (except bedrock, end portals, end portal frames and barriers) as having a blast resistance of no more than 4, making it much more destructive to the terrain. Unless the blue wither skull was shot by the main head during its attack on a target (~0.1% chance), the blue wither skull would be sent in a random direction.

Here's where I got the information:)